Enniscorthy Castle is situated in the historic town of Enniscorthy, Co. Wexford.

The first construction on the site was undertaken over 800 years ago and the castle has played an important part in the development of the town of Enniscorthy, having witnessed many battles, sieges and even a visit by Cromwell’s forces in 1649.

Originally home to the Anglo-Norman de Prendergast family, ownership of the castle has changed hands many times and has included the MacMurrough Kavanagh clan, Sir Henry Wallop and the Earl of Portsmouth. The Roche family were the last to live there, departing in 1951.

Wexford Paranormal first visited the castle in early 2011 and have returned many times since then. In 2012, paranormal investigation teams from around Ireland also started to visit Enniscorthy Castle.

On one of our very first visits to Enniscorthy Castle, We were joined by a journalist who was doing a piece on the group and a press photographer. We received some ITC responses and since then we have had numerous further contacts from ‘Jim’ who revealed such information as his firstname, surname, his wife and son’s names and following up on this information we were able to locate them in the census of 1901, including where they lived in the area at the time.

Further research showed us that he still has family living in the area and as such we have taken the decision to not release his surname. We are currently carrying our further research into ‘Jim’ and his family based on the information we have been given. The recording of our initial contact with ‘Jim’ is available in the EVP section of our website. 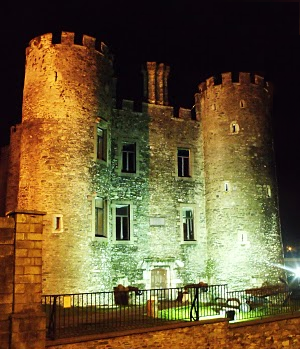 WHAT PEOPLE ARE SAYING

On behalf of the team i would like to thank Michael for a brilliant night @ Enniscorthy Castle, and was a pleasure to be there. Nice to meet the rest of Wexford Paranormal Team as well. I know some of us will DEFINITELY be back…….

Wow is all I can say !! What an amazing night with u guys can’t wait to do it again 🙂

Cracker of a night in enniscorty castle 🙂 wel done guys 🙂 cant wait 4 round 2!

Just in bed after a totes amazing night with wex paranormal in enniscorthy castle!!!

It was a truly amazing weekend at the Castle and I can not settle one bit now I am home.

A big thank you to all at Wexford paranormal for a brilliant night at Enniscorthy castle last night. Really enjoyed it 🙂

Wat a amazing night last night .. Had such a great time .. Thanks guys

Share This
We use cookies to ensure that we give you the best experience on our website. If you continue to use this site we will assume that you are happy with this.Ok